“It’s a myth to think that just because we heard from God that we’ll be able to follow through with it without his grace and his help.”

“The work of the Lord is never neat and tidy. I rarely find that God puts it in a perfect box and hands it to us and says, ‘Look, I designed this thing. It’s perfect as it is. Just don’t mess it up.’”

“Just because there’s a strong move of God, you can almost expect that there will also be a strong work of the enemy against it and that you can expect it to be messy.”

“We should call [the character issues] out, as Christian leaders…we have to do that.”

“We look at the New Testament, which is this big revival. You know, it’s full of these ups and downs and deceptions and problems and character issues. That’s a part of how this stuff works.”

“This is going to sound super obvious, but it was one of those insights that hit us as we were kind of researching and writing, is that no revival happened without revived people.”

“If I’m thinking about two unique contributions that American Christians can bring to the culture, I think one is obviously the power of the Holy Spirit…But the second and this—I don’t know how this will connect—I think we can bring reconciliation.”

“In a time where we’re dividing up and where there’s the enemy out there and we’re constantly putting ourselves as different from the other, you’re seeing communities of faith where it’s not in the news, but they’re still forgiving each other.”

“We have podcasts and other things out there sort of exposing the things that are happening. I think we’re getting to the point where we are desperate…What a great time, then to say, ‘Ok, we’re going to admit the truth of the thing that’s always been true: We can’t do this on our own. It has to be God doing it. And how do we come back to it?’”

Mentioned in the Show 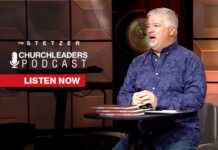