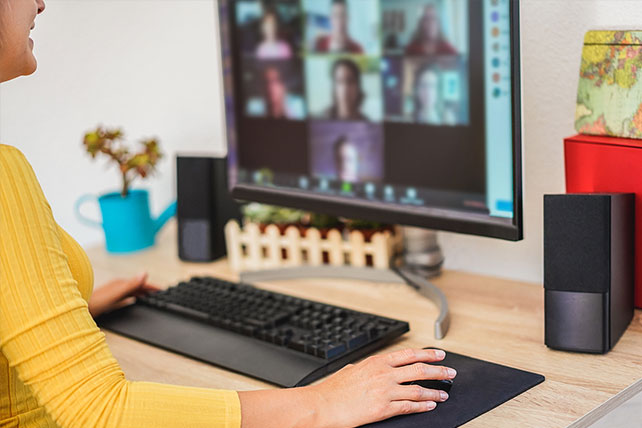 People are ghosting online small groups in an alarming rate. Typically, when people sign up for a small group, we expect a gcertain number to not show up. That’s just how things are in small group world. At the church my family attends, people just choose a group from the website. The problem is what happens next.

I asked one of the Small Group Pastors how well that system worked. He said the previous week that 53 people had signed up to join a group. Then, I asked how many of those people were contacted by the leader. He pulled out his phone and said that 27 were contacted. Now, the sign up number was effectively cut in half. Then, I asked how many of those new people actually made it to a group. His reply was, “I don’t know.” He’s not the only one who’s had that experience. But, the problem is that the sign up to show up rate for online small groups is even worse.

Here’s the reason why people are ghosting online small groups.

Wouldn’t you think it would be easier to get people to an online group than to somebody’s house? It seems that turning on a computer and logging into the meeting is much easier than walking into somebody’s house. But, it isn’t.

What do you do? People need conversation and community. There’s a lot going on in the world – a global pandemic, racial injustice, economic uncertainty, and political upheaval – they need a place not just to process all of this, but a group who will point them back to the truth of God’s Word, the Bible, amidst all of the uncertainty. But, how do you get them to a group with so many roadblocks?

Make Part of the Equation Familiar

If online small groups present three unfamiliar dimensions: small group meeting, strangers, and online, how can you make part of this more familiar to them? I’ve said for a long time that “groups of friends tend to last longer than groups of strangers” (Exponential Groups). The friend factor is the answer to getting people into unfamiliar online small groups. But, you have to change your approach.

You must abandon passive recruiting methods in forming groups. Passive methods include things like sign up cards, websites, and small group directories. While these methods seem efficient, they are simply not get effective in getting new people into groups in any season, especially now in forming online groups. There’s just not enough motivation and connection to get people to groups. Think about the amount of time you’ve wasted trying to move heaven and earth to get people into the right group only to see them not even show up. You need to get out of that business.

Instead, turn to active recruiting methods like asking people to start their own groups. If they start the group, then they’re in! If you give your people permission and opportunity to start a group on their terms with your curriculum and coaching, they will take you up on the offer. They will use whatever platform they are familiar with to start an online group: video, audio only, or asynchronous.

Another active recruiting method is personal invitation. New leaders, established leaders, and “gatherers of friends” simply make a list of the people they already know and invite them to the group. Who do they know who would enjoy or benefit from the online small group? They can list friends, neighbors, co-workers, church members, and others. Since these are online groups there are no geographical boundaries. They could invite their Facebook friends and other social media connections. They could invite high school friends and college buddies. One pastor from my coaching group started a group with three college friends. They’re in Washington state, California, and New York!

I know what you’re thinking: What about the people who don’t get invited? Well, as Brett Eastman told me once, “Let the exceptions be the exceptions.” You can start a lot of new online small groups doing what I just mentioned, but there is one more active recruiting method you should try: personal introduction.

Typically, personal introduction is conducted as a small group fair, group link, or connection event. This is an in-person meeting where potential group members have a chance to meet the leaders and sign up to join a specific group. Right now, an in-person group might not be an option, or even if it is, people may not show up. You can offer an online version of a connection event. You could invite everyone to a big chaotic Zoom meeting, then let the online group leaders introduce themselves via video. (Zoom webinar might work better for this). Another option is to ask each group leader to make a short, personal video to introduce themselves: who they are, a little about their family, what kind of work they do, and what they’re group is about. Then, prospective members can sign up for the group they feel the most connection to.

Now You Just Have to Get Them There

If someone misses the group meeting, then someone should call and check on them. This is not to be heavy-handed, but to get them to the group they need. You could say something like, “I’m not calling you like a truant officer. I’m just calling because I care.” Maybe they had to work late. Maybe someone in their family is sick. Maybe they had trouble logging into the meeting. If they need help, then the group could help them. If they need prayer, then the group can pray. Even if they never show up, keep calling, caring, and serving them.

Online small groups are a new thing to a lot of people right now. While online groups have been around for a while (Remember my online group on CompuServe in 1994?), they are unfamiliar to a lot of people. The more that we can eliminate barriers to online small groups and encourage people to start with what they are familiar with, the better chance they have of joining and enjoying their group. If meeting with strangers is an obstacle, then encourage them to invite their friends. If meeting on Zoom is a problem, then encourage them to meet on a platform they’re familiar with.

During the Coronavirus pandemic, one church that I’m coaching has increased their small groups by 50%. Another church started 163 new online small groups in the month of July! This is a season of frustration, confusion, and limitation in a lot of ways, but this disruption has also produced a season of opportunity. By using these strategies, you can help your people to stop ghosting their online small groups.