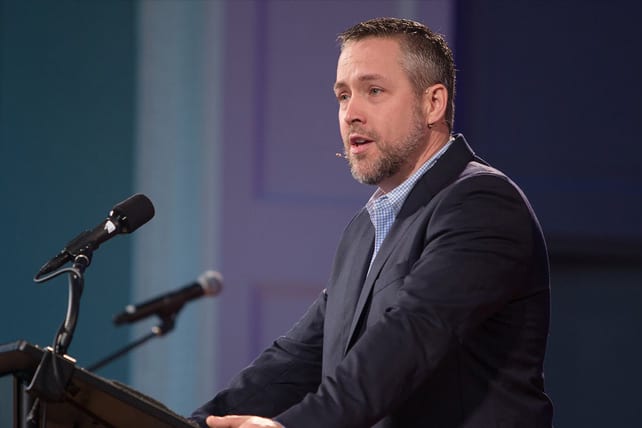 Addressing SBC leaders in Nashville on Monday, Greear acknowledged that abuse reports hadn’t been taken seriously enough and had sometimes been ignored. “There is a problem,” he said, and “it’s time we back up our words with actions.”

Some Churches May Be Ousted

In its three-part series “Abuse of Faith,” the Houston Chronicle (HC) suggests that the self-autonomy of SBC churches may be responsible for the crisis. Greear disputes that, saying autonomy isn’t an excuse for overlooking abuse claims. Yet on Monday, he said SBC churches that don’t “meet the standards of having a faith and practice which closely identifies” with those of the Convention might face removal.

“Churches must be called upon to give assurance to the SBC that they have taken the necessary steps to correct their policies and procedures with regards to abuse and care for survivors,” said Greear. “Our goal here is never disfellowship, but correction.” On CNN Monday, Greear said he, as president, doesn’t have authority to disfellowship a church but that congregational representatives (messengers) attending denominational meetings can vote out an offending church.

Of the 10 churches the HC lists as problematic for how they’ve handled abuse claims, one is Second Baptist in Houston, led by former SBC president Ed Young. The church has denied the allegations. The other churches Greear mentioned are:

One action step is a free 12-lesson training resource that will be available for ministry leaders in June. “Becoming a Church That Cares Well for the Abused” is being developed by a 10-member team of experts, including pastors, psychologists, social workers and attorneys. One member, victim’s advocate Rachael Denhollander, has spoken out frequently about abuse within churches.

The curriculum has two purposes, Greear says: providing “excellent instruction” regarding the initial stages of pastoral care in abuse cases and modeling “good cooperation” between churches and professionals in the community. The goal, he says, is for churches to “care well for the oppressed and abused” and to serve as a “haven” for survivors.

‘Every option is on the table’

Although Greear didn’t commit to establishing a sex-offender registry, he emphasized that “every option is on the table” moving forward. For many years, various individuals and groups have requested a third-party database of offenders within SBC churches.

Proud of @jdgreear. Lifelong Southern Baptists like me understand the unprecedented nature of his statement before the Executive Committee last night. EC trustees, were you listening? Don’t vote for a new Director who doesn’t share JD’s sentiments. #SBC2019 #SBCExecutiveCommittee

Thom Rainer, CEO of LifeWay Resources, the SBC’s publishing arm, also supports a registry. “We’ve definitely had people advocating it up to this point,” he tells the HC, “but (support) has never been at the crescendo that it is now.”