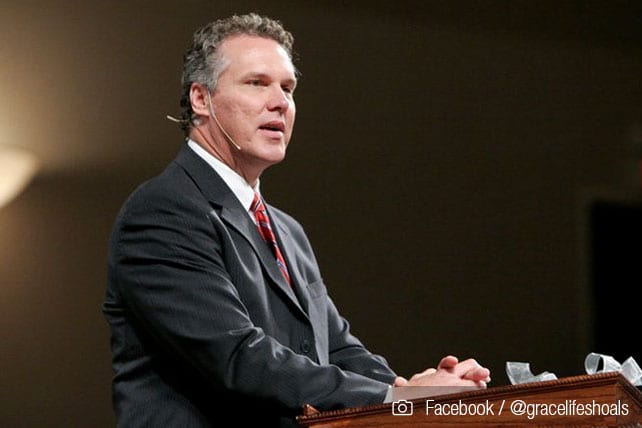 As the public conversation about female preachers continues, the pastor of Grace Life Church of the Shoals in Muscle Shoals, Alabama, has announced that his church will be removing itself from the Southern Baptist Convention. The congregation’s leaders can no longer support what Pastor Jeff Noblit sees as the denomination’s increasing liberalism and idolization of money.

Noblit began his sermon by saying, “I’m going to take a few minutes here this morning to share something with you that is burning in my heart…I’m going to be asking the elders in this church to finally and formally separate all connections to the Southern Baptist Convention.”

Pastor Noblit said that the conversation about leaving the SBC has been ongoing among the Grace Life Church’s leadership for some time. He shed light on part of the source of the tension, saying, “They have formally blackballed us many, many years ago, and chiefly over two or three main things.” Those issues, said Noblit, were Grace Life Church’s decisions to have a plurality of elders, implement church discipline, and hold to Calvinist doctrine. But current events have convinced him it is finally time to leave the denomination.

“In recent days, the straw broke the camel’s back for me and a few logs have been thrown on that camel also,” said Noblit. “One of those is the rise and the embracing and the affirming of Beth Moore’s ministry. Beth Moore is a charismatic, gifted communicator who has drifted toward considering herself a preacher. She does a lot of internet things where she kind of gets in the face of those of us who are conservative in our doctrine.”

Calling it a “serious issue,” Noblit said the Scriptures are “unequivocally clear” in their prohibition against female pastors and preachers. But now, he said, “We have key, prominent Southern Baptist leaders who are accommodating and blessing this.” And the reason why people are supporting Moore, said Noblit, is because of the number of followers she has online.

Noblit believes the SBC idolizes pragmatism and that the denomination’s leaders will give in to anything if it means they can get more money. Grace Life Church, however, “died to that idol a long time ago,” he said. The church had the chance to “be something” in the Southern Baptist Convention, but refused because of its convictions.

The pastor also mentioned that at its last annual meeting, the SBC passed a resolution in favor of incorporating critical race theory and intersectionality when interpreting the Bible. According to Noblit, these are clear signs the SBC has descended into liberalism: “In order to appease the culture and get along, they actually voted to say ‘We will include these unbiblical, God-hating, God-rejecting people and their theories to help us interpret the Bible.’” Instead of being concerned about including minorities in future Bible translations, Noblit said, “What about people who know the Greek and Hebrew? We don’t need tokenism, progressive legalism to interpret the Bible, we need scholars.”

Noblit specifically mentioned SBC pastors Robert Jeffress and Jack Graham, as well as Liberty University president, Jerry Falwell, Jr., saying they have all endorsed Paula White, whom Noblit described as “a heretic, a three-time married pastor who calls herself a prophet.” Noblit also praised John MacArthur, calling him the “leading pastor-theologian in the world” and said MacArthur has publicly denounced the direction the SBC is heading.

While he emphasized there are good people in the Southern Baptist Convention, Noblit stated, “The machine is broken.” To remain in the denomination would be to endorse its anti-biblical stances, and he said, “I’m just done with it.”