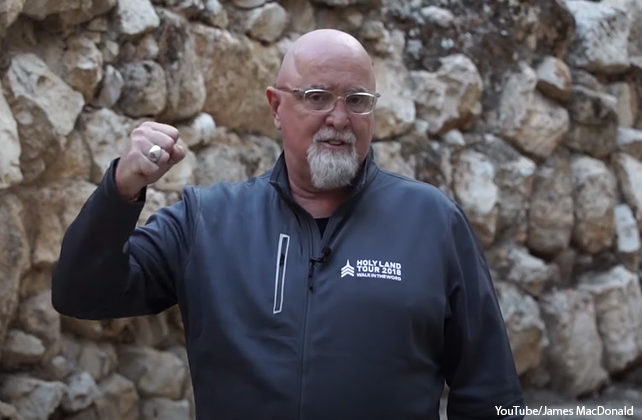 Related to the arbitration on May 18, 2020, the Harvest Bible Chapel elders released an update that read as follows:

On May 16, 2019, we received a letter informing us that James MacDonald is pursuing arbitration with Harvest Bible Chapel through the Institute for Christian Conciliation. Arbitration is a method used to resolve disputes outside of the courts.  Essentially, it allows a group of arbitrators to listen to arguments presented by both parties and then the arbitrators decide how this issue will be settled. Both parties submit to the decision of the arbitrators as it is legally binding. This is not a lawsuit in a court of law, and James has not sued our church by taking this action. The issues of this claim primarily involve the termination of James MacDonald and the ownership of Walk in the Word.

As the leaders of this church, we are committing to communicating about this arbitration process as it progresses. There is no desire to keep this matter unnecessarily private. We expect this to take months, not weeks. The Elders and Church Leadership Team are united in their position that James MacDonald’s termination was with cause and that Walk in the Word is a ministry of Harvest Bible Chapel.

Pray for God to get the glory in this. He is in control. We are His servants.

Court documents recently filed by James MacDonald’s lawyer show that a settlement between Harvest Bible Chapel and MacDonald was reached.

The reached settlement is under a ‘Protective Order,’ according to the court documents filed. This means that neither party can discuss the settlement and that the results of matter must remain confidential. As of this report, Harvest Bible Chapel has not posted any announcement updates on their website nor made any other public announcement regarding the settlement.

In January of 2019, MacDonald took an ‘indefinite sabbatical‘ from preaching and leadership from Harvest Bible Chapel, a church in Chicago of which he was one of the co-founders in 1988. The church started with 18 members and grew to over 12,000 members and seven campuses. It was named one of Outreach Magazine’s Fastest Growing Churches in America in 2015. MacDonald’s ‘indefinite sabbatical’ was taken as a result of allegations that started from former elders who released a letter charging him with “self-promotion…love of money…domineering and bullying…abusive speech…outbursts of anger…[and] making misleading statements.” In a report years later from investigative journalist Julie Roys published by World Magazine and testimonials from Chicago’s ‘shock jock’ Mancow Muller, Harvest Bible Chapel was forced to investigate the claims against their senior pastor. The church then dropped a lawsuit they had filed against some of the former elders and Roys.

At the time MacDonald took the sabbatical, he said that he ‘wounded others without cause‘ due to his battling of injustice, hurt, anger and fear. He took full blame and said in a elder update to Harvest Bible Chapel members that he acknowledged that he hurt people in ‘certain relationships’. He said, “I have carried great shame about this pattern in certain relationships that can only be called sin. I am grieved that people I love have been hurt by me in ways they felt they could not express to me directly and have not been able to resolve. I blame only myself for this and want to devote my entire energy to understanding and addressing these recurring patterns.“

Less than a month after MacDonald started his ‘indefinite sabbatical,’ the elders at Harvest Bible Chapel announced they were removing senior pastor James MacDonald from the church entirely. This was due to inappropriate recordings that were played on Mancow Muller‘s popular Chicago radio show at that time. A few months later, Muller accused MacDonald of attempting to hire a hitman to kill one of his rivals.

Moody Publishers and LifeWay stopped selling MacDonald’s books and materials associated with the author/pastor, shortly after the news of his removal had been announced.

Since being removed from Harvest Bible Chapel, MacDonald has sued former friend and popular Chicago radio host Mancow Muller for defamation, invasion of privacy, eavesdropping, and emotional distress. The lawsuit that seeks $50,000 in damages is still ongoing. MacDonald started a Home Church Network earlier this year that is targeted toward those who “struggle to get to a church or to stay in a church, or to find a church with the teaching, worship and service opportunities that match your passions.” It was also reported in July of this year that his $1.6 million dollar residence in Elgin, Illinois was in danger of foreclosure.