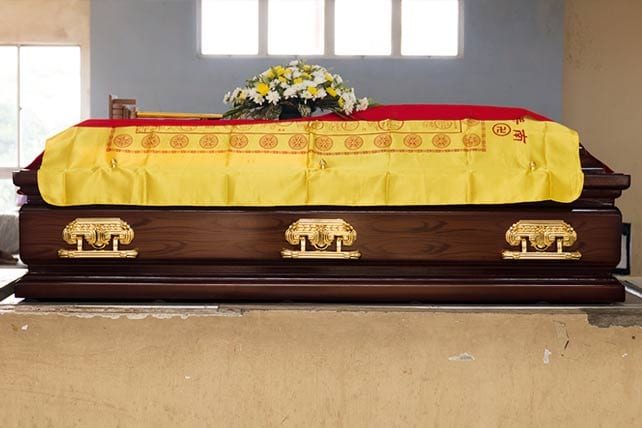 Chinese funerals cannot be Christian funerals, according to the Chinese Communist Party (CCP). Watchdog group Bitter Winter reports that the CCP is furthering its oppression of Christianity and other beliefs by denying people the option of a religious burial. The news comes only days before the government is set to release new regulations restricting religious freedom.

“The new rules codify the Chinese Communist Party’s ideological and leadership supremacy over all religious affairs in China,” says Bob Fu, the founder and president of ChinaAid. “From now on, the Chinese Communist Party will become the head of the churches, temples, mosques, and other religious institutions. They will dominate every sphere of religion, from religious doctrines, leadership selection, financial management, and foreign exchanges.”

ChinaAid says the CCP’s new regulations on religion, set to roll out on Saturday, February 1, 2020, will “extend the Chinese leadership’s leash to carry out acts against Christians.” The regulations have six chapters and 41 articles, the fifth of which says, “Religious organizations must spread the principles and policies of the Chinese Communist Party, as well as national laws, regulations, rules to religious personnel and religious citizens, educating religious personnel and religious citizens to support the leadership of the Chinese Communist Party.”

ChurchLeaders has reported extensively on the CCP’s increasing persecution of believers in China, as well as its efforts to “sinicize” religion in order to make it more Chinese and less Western. These efforts are part of a five-year plan President Xi Jinping has been implementing to reshape religion in the country. The government’s actions have included getting rid of religious language in student textbooks, preventing people from purchasing the Bible online, and demolishing churches.

Now, Bitter Winter has compiled reports that Chinese officials are stopping people from burying their loved ones according to their religious beliefs and forcing them only to have what authorities deem to be Chinese funerals. A county government in Zhejiang province recently adopted a set of policies called Regulations on Centralized Funeral Arrangement. The regulations, which came into effect on December 1, 2019, ban clergy from attending funerals and say that “no more than ten family members of the deceased are allowed to read scriptures or sing hymns in a low voice.” The purpose of these rules is to “get rid of bad funeral customs and establish a scientific, civilized, and economical way of funerals.”

Other local governments throughout China are imposing similar restrictions, and not just on Chinese funerals. A village official from Henan province told Bitter Winter that a document from a local government states that clergy must be “stopped from using religion to intervene in citizens’ weddings and funerals or other activities in their lives.”

Last October, Chinese authorities interrupted the Christian funeral of a woman in Hubei province (the province where the coronavirus outbreak originated) and arrested the woman’s daughter, who was praying. The daughter was released after her mother was buried without Christian rites. Officials apparently learned about the funeral because someone had informed on the family. As ChurchLeaders reported last year, people can earn substantial amounts of money for telling Chinese authorities that Christians in China are conducting “illegal religious activities.”

The government has been imposing similar restrictions on religious funerals in the country for the past several years. Said one church elder from a city in Henan province, “The government prohibits religious funerals, and doesn’t allow church choirs or orchestras to perform during them. Pastors can only sneak into believers’ homes for a hurried prayer. The situation is quite adverse, and some believers don’t even dare to accompany the deceased to the graveyard.” Authorities have also forced people to remove crosses and other religious symbols from funeral proceedings.

In addition to its ongoing oppression of Christians, such as Pastor Wang Yi of Early Rain Covenant Church, and the “cultural genocide” it is conducting against the Uighur Muslims, the CCP has been implementing facial scanning technology throughout the country. The point of this technology, says Morning Star News, is to “to collect data for the purpose of establishing a ‘social credit’ system to monitor perceived loyalty and dissent.”

Open Doors president and CEO David Curry recently said, “China is creating what I believe is a ‘persecution roadmap’ against religious faith. It is the greatest threat, in my opinion, to human rights today.”

Elizabeth Kendal with the Religious Liberty Prayer Bulletin believes, “The days are coming when whole Christian families will find themselves unable to access not merely transport, but schools, hospitals, bank loans and jobs.”